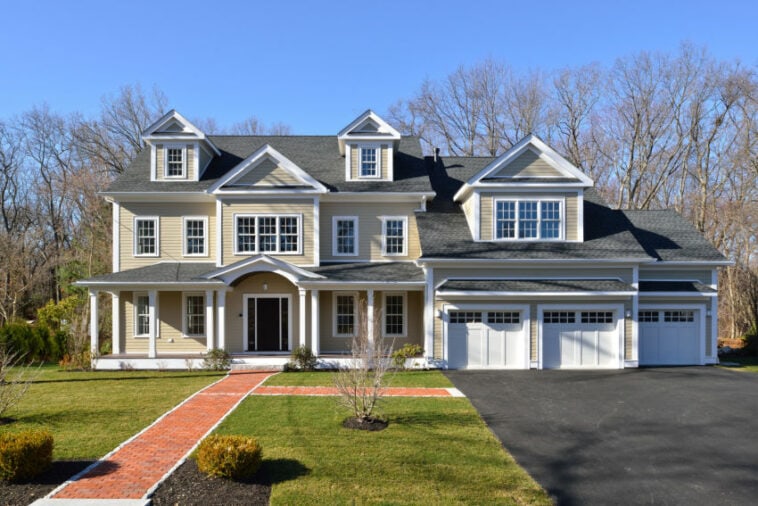 Dating back to as early as the 1700s, colonial houses are a symptom of British colonization in America. Known for their symmetry and simplicity, the various types of colonial houses comprise the famous architectural designs for homes in the United States.

Their elegant style displays a classic timelessness, evoking curiosity in the mind of the onlooker. With European and American influences, the colonial houses now are a fusion of the three terrains, giving rise to a variety of such houses.

But before we familiarize ourselves with the different types of colonial houses existing today, let’s know a bit about what is colonial house and what makes a house colonial.

What is a Colonial House?

Have you ever looked at a house and been baffled by its symmetry which almost makes it look like a drawing on a canvas? That’s exactly what a colonial house is.

A two-story building with a door front, brick or wood siding, and multi-paned uniform windows are the characteristic features to identify a colonial house. However, over the years these houses have evolved. You can expect to find regional tweaks made by architects to suit weather conditions across the country.

The classic symmetry and traditional aesthetics make colonial houses a treat to watch. They are a beautiful investment with easy and high resale value. Painted in neutral shades, these houses typically have large rooms best suited for families.

Characteristics of a Colonial House

Vastly popular on the east coast of the United States, colonial houses have distinct characteristics that can help you identify them in a wink. They follow detailed structure and design that makes them stand out from other houses.

Here are some of the features that go into making a colonial-style house.

Colonial houses have the most eye-catching exterior designs in the entire state. Ideally, they have a square or rectangular shape with a gabled roof and a central entrance. These are several storied houses with sidings made of brick, wood, or stone. Further adding elegance to the overall look of the house are its symmetrical windows and doors.

From the ancient rustic designs to the modern lavish ones, the interior of a colonial house will always leave you in awe. Continuing the exterior symmetry of the house is a central staircase that divides it into two similar halves. A large fireplace and wooden furniture with generously spread cushions and rugs are must-haves in a colonial house.

Carrying forward the traditional customs, colors for a colonial house are often picked from a sober palate. Greys, white, beige, browns, or dull greens are the way to go with these houses. You might find frescos of flowers and fruits on the walls but they are in adherence with the neutral color pattern of the entire house.

Ideally designed to scrap out heavy piles of snow, the steep roof adds an elegant look to the colonial houses. These low-maintenance roofs make your attic area more spacious with proper ventilation. An end or central chimney on these steep roofs further gives them a classic look.

Typically, these houses contain two windows on either side of their decorative entrance with additional four to six windows on the second floor. These are double-hung and multi-paned windows with vertically sliding shutters that glide downwards from the top. 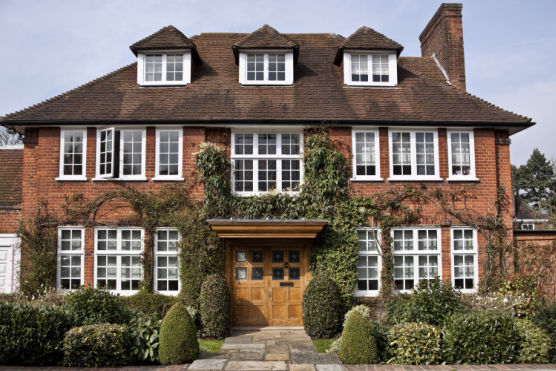 Deriving its name from Britain’s King, George I, Georgian-style houses are structured on the ideals of the ‘golden ratio.’ This mathematical ratio accounts for the immaculate symmetry and graceful balance of these colonial houses.

Hipped or gabled roofs with a chimney on either side are the formulaic design followed to construct the ceiling of these houses. They have a decorative entrance door crafted exactly at the center point of the wall, dividing the house into two identical halves.

These houses have a typical gothic vibe with an attic at the top while boxy rooms and private gathering spaces are on the ground floor. 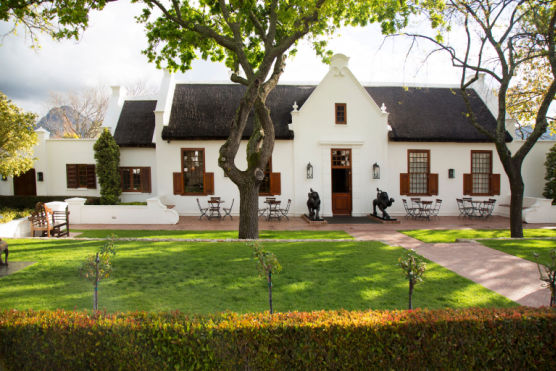 When identifying a Dutch colonial house, roofs are what you need to look out for. The double-pitched roof with a fairly flat upper roof followed by a steep one gives them their distinctive design.

Typically made of stone or brick, these houses have unique doors with a horizontal division in the middle. You can easily open the upper half of these doors according to your requirement and convenience.

Another must-have feature of a Dutch colonial house is a fireplace with a chimney attached to it. The area around the chimney is often marked with lavish wooden furniture and decorous rugs. 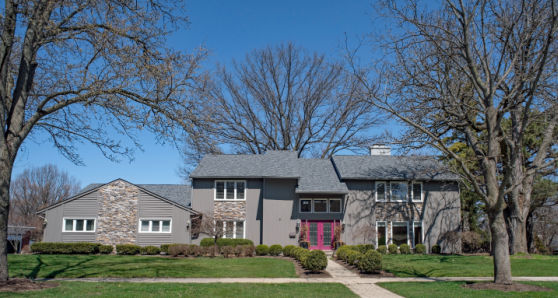 Named after a wooden box utilized to stock salt in ancient times, saltbox-style houses have strong colonial roots. Similar to the other colonial houses, the saltbox also has two stories in the front but only one at the back. The unique roof shape with an unsymmetrical brick chimney sets it apart from other colonial houses.

The term “catslide roof,” which describes a form where the roof extends down past the home’s eaves, is frequently used to describe its angled roof type. Due to the high expense of metal nails, saltbox houses were often built with wooden frames and had a leveled exterior wall with a central chimney in the front. 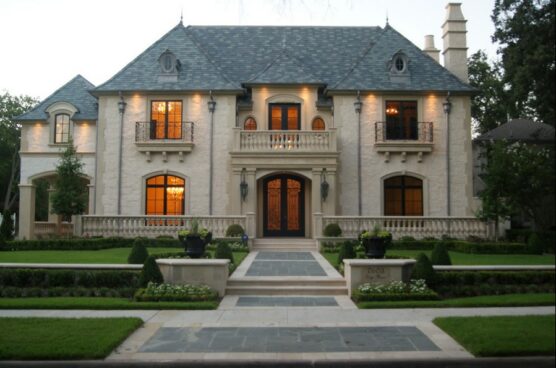 Originating in the 1700s, French colonial houses are similar to other colonial houses in maximum features. However, what makes them stand out is their wide porches. These houses are surrounded by beautiful galleries, protected by steeply pitched roofs.

They have a symmetrical design with the exterior walls enveloped in stucco and the interior ones with timber made of straw or clay. Following the tradition of colonial houses, they have a central entrance door with two windows on each side.

Constructed in a weather-friendly manner, French colonial houses have raised basements to protect the living premises from flooding in the rainy season. Besides, its high ceilings help to relieve the humid and hot conditions. 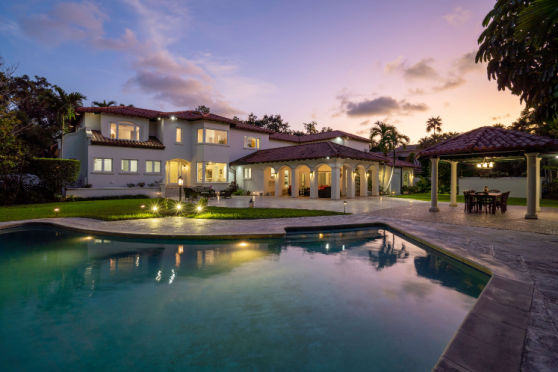 If you encounter houses with thick stucco walls in elegant white color, be sure that it is a Spanish colonial house. Typically found in Southwestern states, these walls protect you from warm temperatures by absorbing the heat of the sun during the day while keeping your house warm by releasing this heat at night.

A low-pitched roof with red, clay tiles is another characteristic feature typical to Spanish colonial houses. Often, you can find wooden beams coming out of the roof’s exterior or even in interior private spaces to support the walls and ceiling of the house.

Unlike the elaborate decorative entrances of the colonial houses, Spanish colonial has minimalist exteriors with little or no decorations. Usually, they have titles or stonework for outward passages and doorways.

Colonial houses have evolved in their style through the ages, and a modern 21st-century representation of them is the Neoclassical colonial houses. Positioning balance, geometrical forms, and symmetry as their thriving pillars, these houses project a great contrast to the asymmetrical curves and designs of Baroque-style architecture.

The focus of a Neoclassical colonial house falls on its doorways which are elaborate and stately with triangular pediments to enhance its elegance. Besides, windows are evenly placed to maintain the symmetry of the exterior facade. 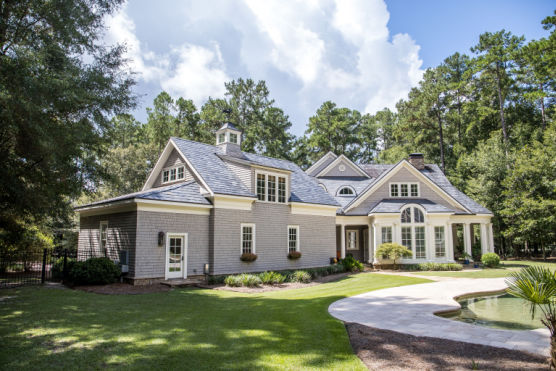 The trademark design of Massachusetts’ houses, cape cod style, is omnipresent in the United States. The simplicity and clean, sharp edges of these rectangular houses will leave you nostalgic for the house we used to draw as children on a canvas.

These are timeless houses with basic exteriors and steep roofs to prevent the piling of snow. You will find these houses having one story with an optional half-story ranch on the second floor.

They have a mandatory central chimney with minimal interiors, a primary bedroom, and a living room. Oak wood flooring and brick fireplaces are commonplace sites in cape cod style houses. 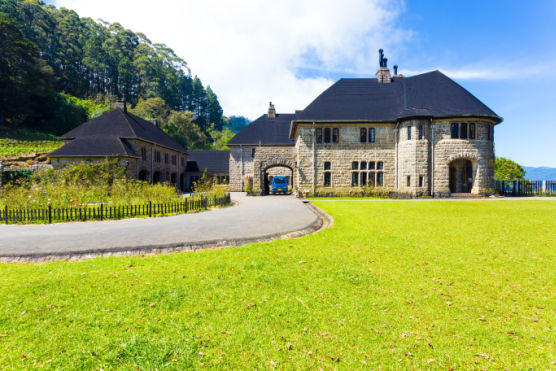 Founded by the New England settlers during their colonial rule in America, British colonial houses are the most common spot in the United States, typically in the Northeastern region of the nation.

Obsessed with the symmetrical construction of things, these settlers made these houses with the uniform placement of doors and windows. Besides the shutters in the windows, they had brick or wooden columns around the doors.

To prevent the interior from the heat of the sun, these houses were painted in neutral shades like white or beige. Wood-frame establishment and a fireplace in the middle of the living room are some distinctive features of British colonial houses. 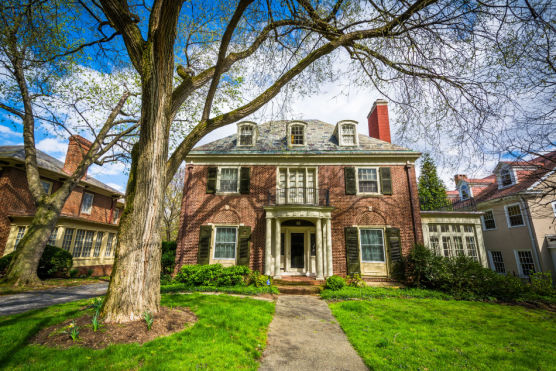 Thomas Jefferson helped in the conception of this elaborate colonial house style called Mid-Atlantic. Popular in the regions of New Jersey and Virginia, Mid-Atlantic houses are symmetrical two-story buildings with a central door.

These types of houses focus on elaborate decorative entrances occupying huge spaces. They typically have a colossal exterior made of wood or bricks. They have rectangular-shaped windows with shutters that are uniformly positioned across the entire house. 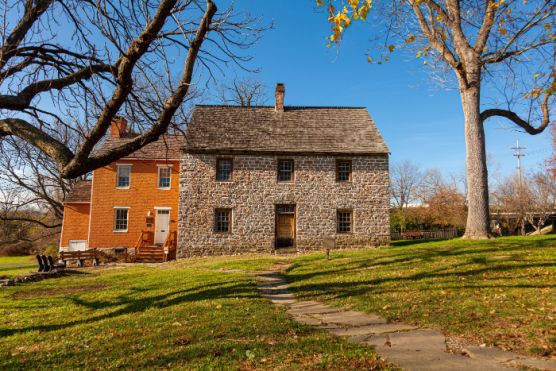 German colonial houses are often confused with British colonial houses because of their similar structure and popularity in areas around the Northeastern part of the Nation. However, what separates them is their rustic exterior with thick stone walls.

These buildings are usually half-timbered with steeply pitched roofs, covered with tiles or shingles. An attic on the roof is a must-have feature of the German colonial house, typically adding to their gothic vibes.

These houses have a central fireplace in the drawing room, connected with an equally centered chimney to keep the house cozy and warm. Further, they have double-hung windows with wooden frames to keep the glass pane in position. 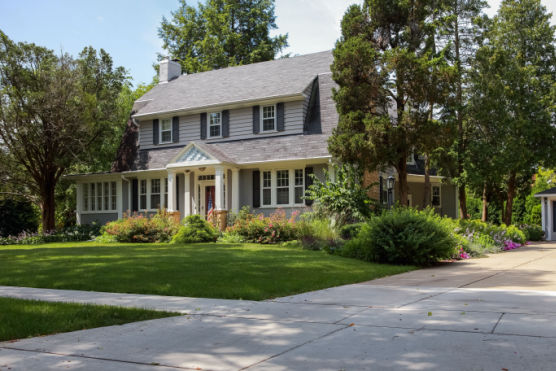 Colonial revival style traces the evolutionary history of colonial houses extracting characteristics and inspiration from Dutch, French, British, and Spanish styles. It cannot be marked as a single identifiable style, rather is an amalgamation of various colonial designs.

The roofs in these houses are not limited to a single pattern and can be gambrel, side-gabled, or hip. They have decorative doors and windows with beautiful carvings and designs that cannot be parallel with any other colonial-style house.

The elaborate galleries of French colonial houses are here transformed into porticos on entrances with decorative pillars or brick columns. Fireplaces, a central staircase, and exterior brick walls are some other characteristics that define a colonial revival style house.

All these types of colonial houses are intriguing in their unique way. Some would lure you with their magnificent exterior while others might touch your heart with their subtle simplicity, but I am sure that none will fail to leave you in awe.