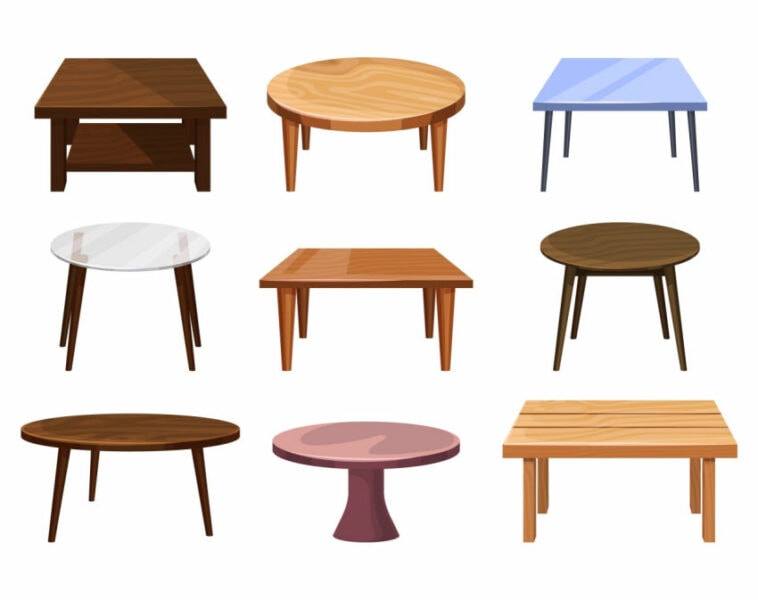 Table legs are often an overlooked aspect when it comes to interior design. Table legs can blend into the overall theme of the room, or highlight the tabletop itself.

The right kind of furniture, including table legs, can add cohesion to your room, if not add a finishing touch to it. Every choice in interior design can make or break the overall aesthetic of any home.

For this reason, I have compiled a list of all the different styles of table legs. Read on to take one step closer to furnishing your dream home!

23 Types of Table Legs to Know About 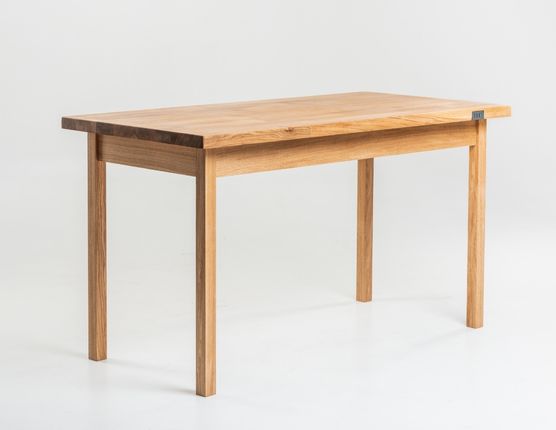 Starting off with the most common type of table leg you’ll find in the market, the straight legs look exactly what they sound like.

They are vertical table legs that extend downward in a straight line. They are often rectangular or cylindrical. They don’t deviate from this design, no tapering, no spiraling. Though they might come off as bulky in some designs, they are a simple but efficient solution.

Fluted legs are characterized by a series of vertical flowing grooves, carved in regular intervals.

These table legs were designed to mimic the Greek-styled columns which were popular in the Neoclassical era of the 18th-19th century. Fluted legs have a concave surface, rounded inwards.

Trumpet legs are typically wide table legs with a number of flares and curves. They are domed at the top, and they end in either a ball foot, a bun foot, or a Spanish foot.

Trumpet legs get their name from the flared top with tapers down to the bottom, making it look like an inverted trumpet. Found in Baroque-style furniture, they can also come with several etchings and designs carved in. They are also called trumpet-turned legs. 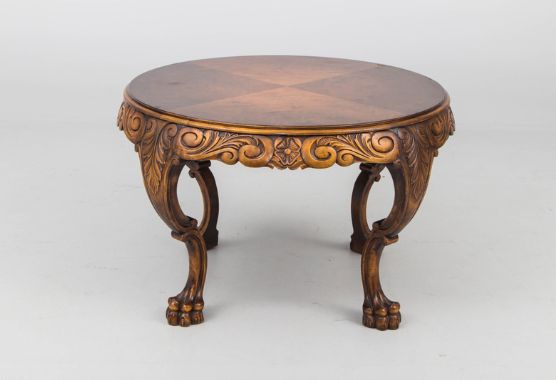 Popular amongst consumers looking to add a vintage flair to their homes, clawfoot legs are a throwback to Baroque-era French design.

Although this design fell out of favor in the recent century, they are still prevalent in luxuriously furnished homes. They get their name from their design, which resembles a lion’s claw at the base. 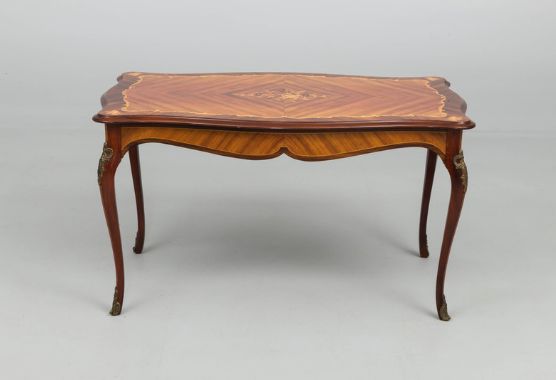 Associated with a more antique style of furniture, cabriole table legs have long been a part of designs grouped with Queen Anne and Chippendale styles.

Cabriole table legs are thicker at the top, often etched to give the entire table a unique personality. The leg curves outward as it flows down, almost making it like a “knee”, which curves inwards again to form an “ankle” and finally ends with the elegant foot of the table leg. The foot itself can come in several styles. 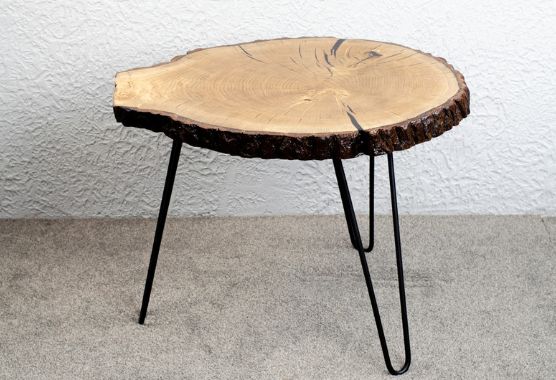 A type of table leg that has seen a considerable rise in popularity, hairpin table legs are the epitome of minimalistic design.

Commonly made with steel, hairpin legs are light and rounded at the bottom. They are made from a single piece of metal, that descends down and curves back up to meet the tabletop again. The shape thus is similar to that of a hairpin.

Developed in the latter half of the 17th century and prevalent in Baroque-style designs, Flemish scroll legs are characterized by the scrolls which are present in the top and bottom of the leg.

The scrolls on the legs swirl on opposite ends of each other. They are also referred to as double-scroll legs or S-scroll legs.

Mostly found in mid-18th century English or American furniture, Marlborough table legs have an incredibly simple design. They are usually straight and square shaped, which may either end with a block foot or be footless.

Tables like these may have some fluting, while the leg itself can sometimes be tapered.

A design from the midcentury modern trend, starburst table legs are arranged in the classic shape of the same name. The legs themselves can be thicker or thinner, depending on preference.

Although they do not provide the best stability, they work excellently if you need to evoke the early 50s feel with your coffee table or side table. They are more of an addition to the room rather than a utilitarian choice.

In contrast to the earlier option, you have the shaker table legs in the polar opposite of the spectrum. Shaker legs get its name from the Shakers in New York who build furniture.

RELATED:  37 Types of Glass Front Doors for Your Home

Shaker legs are wide at the top, which tapers down to a smaller diameter at the foot. They look simple as well as extremely stable.

If stability is your key priority, especially in a workplace environment, then you have to look no further than the sawhorse table leg.

Tables with sawhorse legs have four triangular “stands” that are interconnected, giving them the ultimate stability. The sawhorse design originated from industrial factories of the 19th century. Now, they are a common choice for craft benches and office desks.

Reminiscent of the curved swords it gets its name from, saber table legs are perfect for people who want a modern touch to their antique home décor.

Saber legs are a type of splayed leg, which means they are cut at an angle on the top which causes them to flare out. They are concave and curve outwards. The leg itself can be squared or rounded, tapering down from the top.

A staple in the modern furniture design catalog, the tapered tilted table legs provide a lot of personality to the room without the need for extravagant flairs or details.

These table legs are straight, slightly taper towards the ends, and support the tabletop at an angle. Usually, they’re colored a little lighter than the tabletop.

Turned table legs get their name from the process in which it is made. These table legs are rotated on a lathe. With this turning, a machine is programmed to create engravings, and shapes, amongst other things on a thick piece of wood.

The piece of wood is brought up and down as it rotates to create various patterns and details.

Spiral table legs are some of the oldest styles in design. Originating from India, this style eventually spread to England, Portugal, Holland, and other places across Europe.

The design is meant to resemble a twisted rope. This style had a resurgence through Victorian-style interior design in the mid-19th century. This is a popular choice for people wanting a vintage touch to their rooms. Spiral table legs are also called barely-twist and spiral-twist table legs.

Perfect for candlestands or as a tea table, spider leg tables typically end in squared feet or no feet at all. These legs start at the center of the table and descend slowly before flaring toward the bottom. Spider legs can also be straight and thin, the kind found in gatefold tables.

Similar to fluted table legs, the reeded legs have grooves that run down vertically. These grooves are evenly spaced with rounded depressions as the grooves.

Reeded table legs were modeled after the Greek and Roman motifs, which became popular in the Neoclassical revival of the 19th century.

Hepplewhite table legs may structurally be straightforward, but their true characteristics come from the engravings and various inlaid details on the surface of the table leg itself.

Designed by George Hepplewhite, these table legs are plain, straightforward, and usually without a foot. These table legs have careful and detailed carvings or veneer, patterns, and so on. 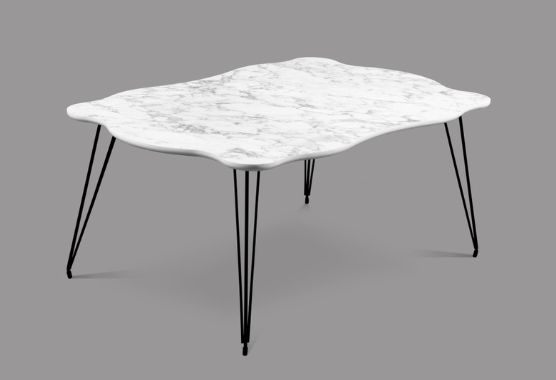 A more abstract form of table legs, the wireframe leg is made up of several metal pieces (usually steel), as seen with hairpin table legs.

Instead of just one piece of metal, wireframe legs form a cohesive shape using multiple pieces. The “standing rectangle” is the most common form of wireframe legs. However, they might provide the best weight support, so choose them according to the function you have for them.

Designed by the Danish Hans Wegner, Wegner table legs are smooth and elegant.

Built to support heavier tabletops, these legs have a smooth finish, squared, and taper down from the top. They can be attached straight down, or at an angle for a modern touch to your room. 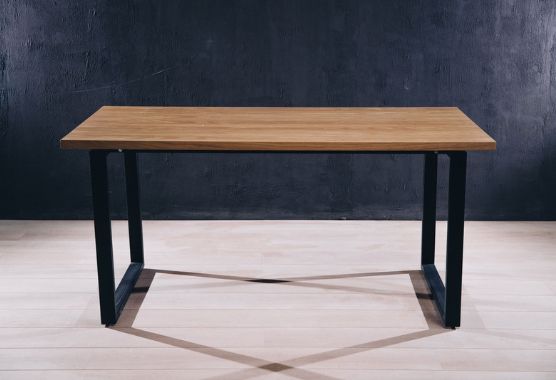 U table legs are named after the shape they form. As you can imagine, these table legs connect with each other on the same side to form a “U”. Sometimes all four table legs are connected to each other with a beam that runs along the perimeter of the table itself.

Popular in modern houses, they are usually seen as coffee tables or desks, and rarely as dining tables. 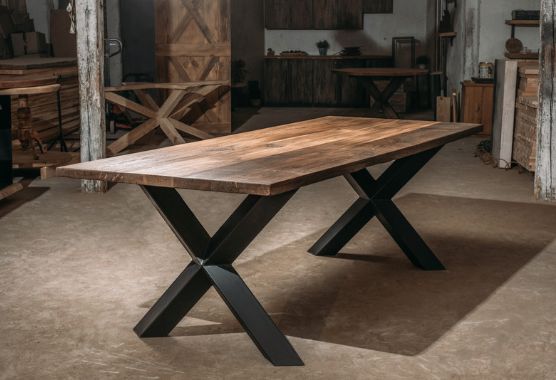 Similar to U legs, the X table legs are formed when two table legs on the same side intersect at a central point and then run down to the base.

The X table legs are also a part of many modern home designs, and give an industrial feel to the room. They offer decent stability and function mostly as coffee desks.

By now you must have realized how every type of table leg can add something to the room itself. Although this might be ignored in a cursory view, an out-of-place table leg can stick out like a sore thumb.

Fortunately for you, you can now navigate through the different types of table legs, and choose the one appropriate to your choice and aesthetics!