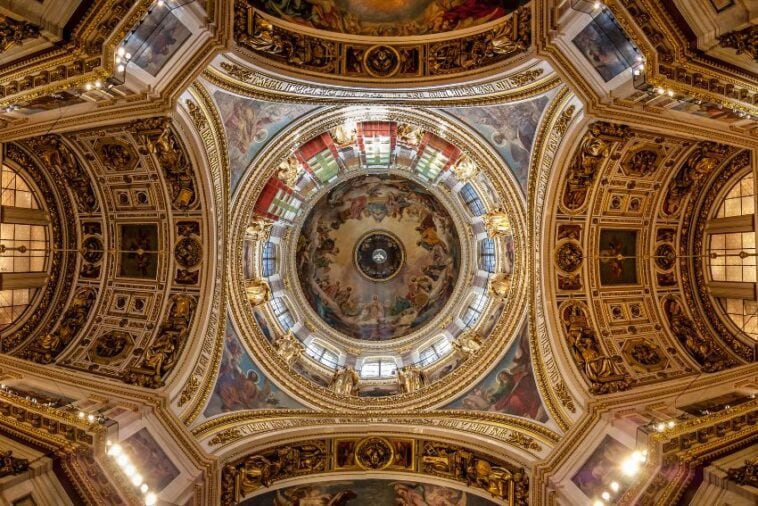 When designing your dream home, people often overlook the design of the ceiling and how much it contributes to the aesthetic of the interiors. 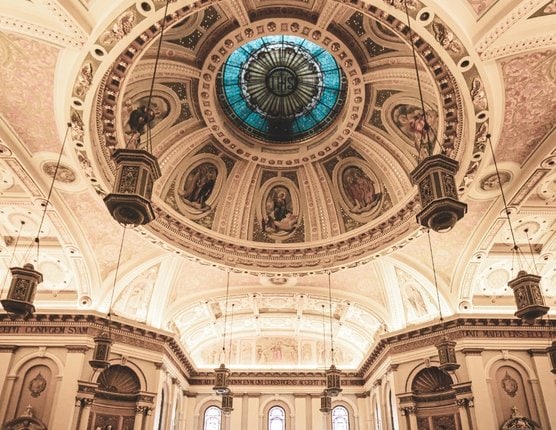 As the name suggests, dome vaulted ceilings are flat ceilings that have a dome carved into it. This recessed ceiling gives the illusion of more space in a room that is otherwise small. 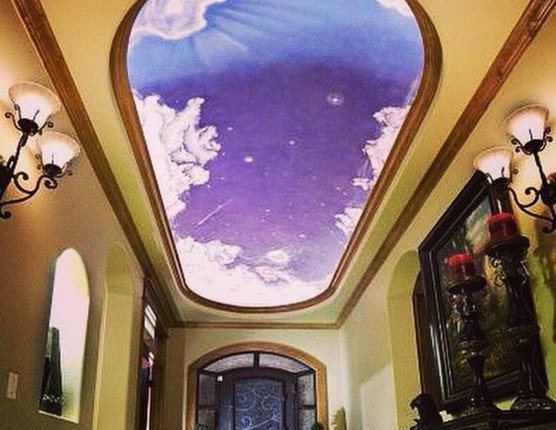 Aside from the illusion it creates, this type of ceiling allows you to add an artistic touch to the interiors by giving the ceiling some space for intricate paintings. 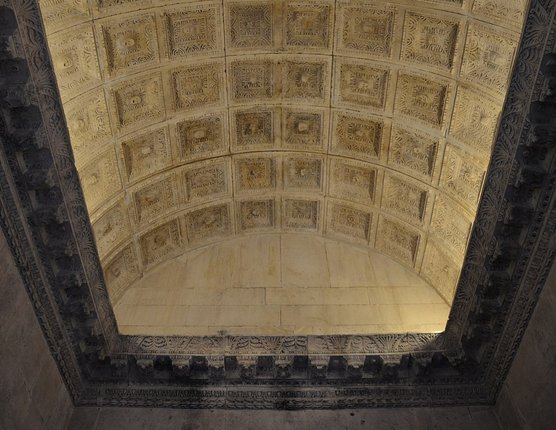 Another vaulted ceiling named directly after its design, the barrel vault ceiling is meant to be built as a single arch that starts from one wall and runs across the width of the room till it meets the opposite wall.

This type of ceiling is meant to represent the cross-section of a wooden barrel, hence the name. The barrel vault ceiling is simple, yet adds an elegant flair to rooms that have a long walkway such as halls and libraries. It can also be seen as a series of domes interconnected with a single surface to create the illusion of a tunnel. 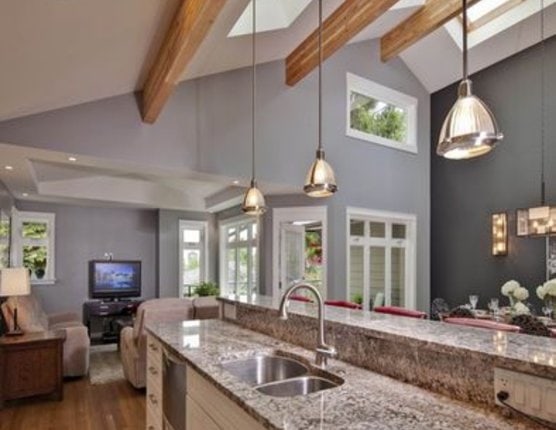 By definition, vaulted ceilings are taller than average ceilings, but they are still bound within the confines of the housing exterior itself. If the ceiling does do that, we end up with an asymmetrical vaulted ceiling.

While it might sound like a horrible idea on paper, there are several ways to design an asymmetrical vaulted ceiling. They are meant to look abstract, and definitely a better alternative than building a ceiling close to the roofline. 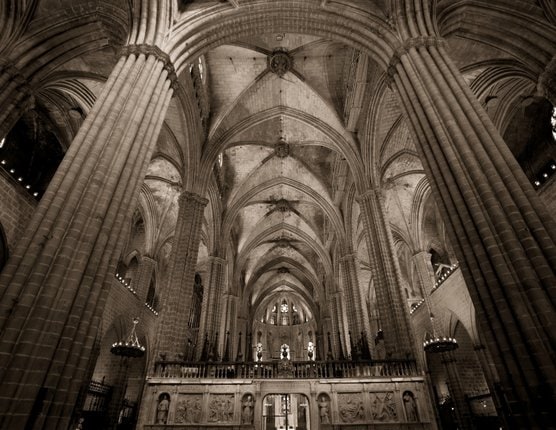 While some might argue cathedral ceilings are their own type of ceilings, it is undeniable that they fit in with the definition of a vaulted ceiling.

Cathedral ceilings are two parts of the roof that slope up from the opposite walls and meet at a central axis that runs the length of the roof itself. The name comes from the fact that this kind of ceiling is most often seen in churches and cathedrals. Unlike the previous entry, they aren’t necessarily contained within the roof of the house. 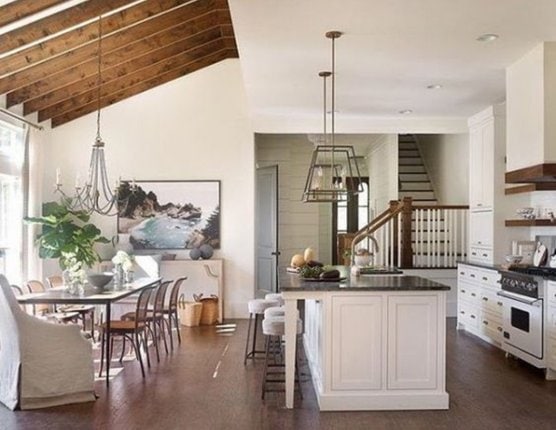 When two rooms are interconnected in a way where there is no partition between them, you usually get a half-vaulted ceiling. This is when ceilings of two different styles adjoin side-by-side the same way the rooms are.

In this style, one ceiling is significantly lower than the other one, usually because the former has a structure like a staircase built on top of it. With some interplay of functional needs, a half-vaulted ceiling can give the impression of modern interior decoration. 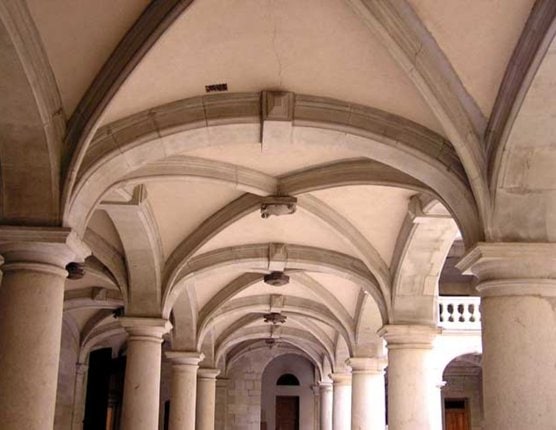 Made from the combination of two barrel vault ceilings that intersect at 90 degrees, the groin vault ceiling can prove to be the center of attention in any room you construct it in.

Their construction guides the eye upwards naturally. Given that it is gorgeous to look at, groin vaulted ceilings add a lot of personality to the interiors. This type of ceiling is usually relegated to hallways. Though they add an undeniable charm to the house, groin vault ceilings are incredibly difficult to construct and need professional builders. 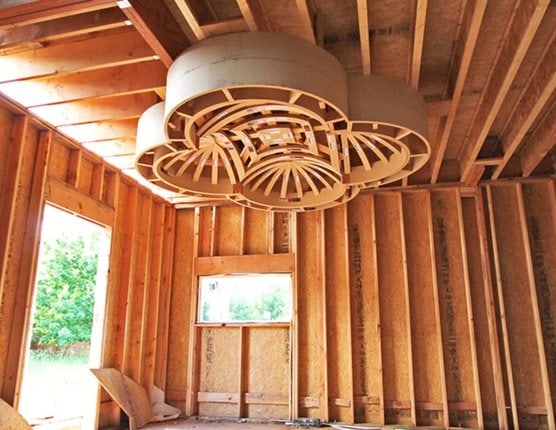 Coming to an unconventional and distinctive type of ceiling, the grome vaulted ceiling is guaranteed to make you the talk of the town!

Grome vault ceilings are constructed using architectural design elements from both dome vaulted ceilings and groin vaulted ceilings. The resultant design is uncommon, but it is a sight to behold when done artistically. 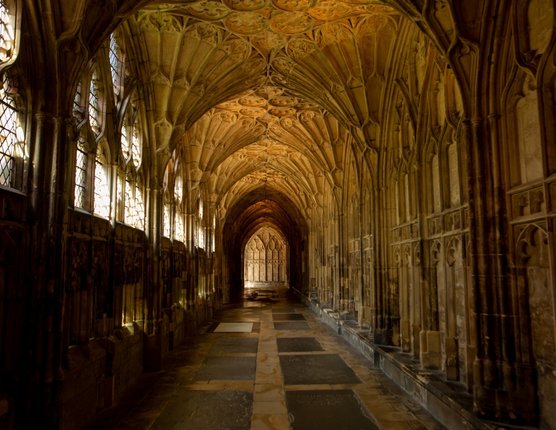 As the name suggests, fan-vaulted ceilings are characterized by structures that resemble a fan (or a seashell) that start from the wall and meet at a certain point on the ceiling. This ceiling structure functions as a stunning piece of art and is usually seen in buildings that have a wide ceiling space, such as cathedrals. As with any ornate-looking ceiling structure, they do require skilled labor in order to pull off successfully. 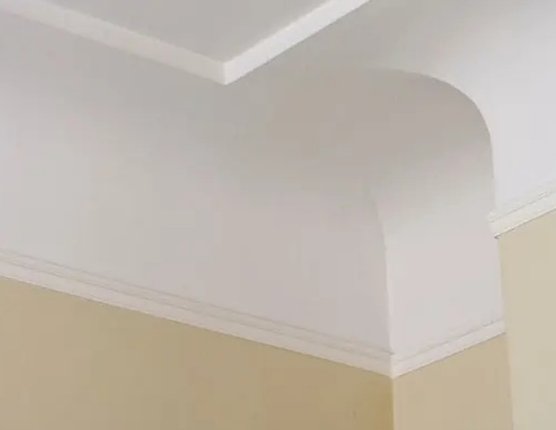 Coming back to ceilings that will help create a subtle yet comfortable environment for your interiors, cove vaulted ceilings give a soft look to your house.

Cove vaulted ceilings achieve their soft look by having rounded corners, which means there is no discernible difference between the ceiling to the wall. This sleek design gives your room a rather sophisticated look, and a modern touch to the overall aesthetic of the interiors. Cove vaulted ceilings give you more room to get creative with the paint and furniture. 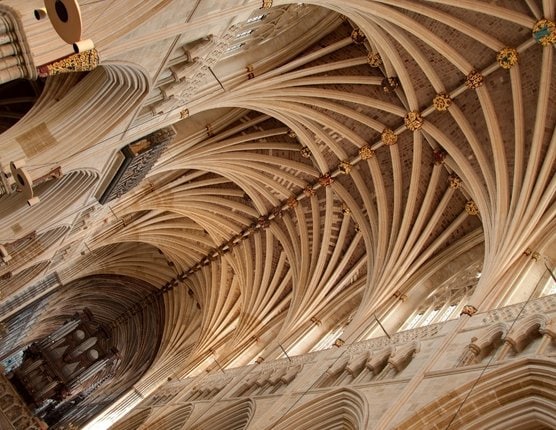 Cloister vaulted ceilings rely mainly on the construction of spring points or spring lines. Spring points are defined as the apex point of the arches where they curve on a wall.

Cloister vaulted ceilings are made up of these spring points which go along a wall and then converge on one or more points on the ceiling. This type of ceiling is reminiscent of cloisters, hence the name. 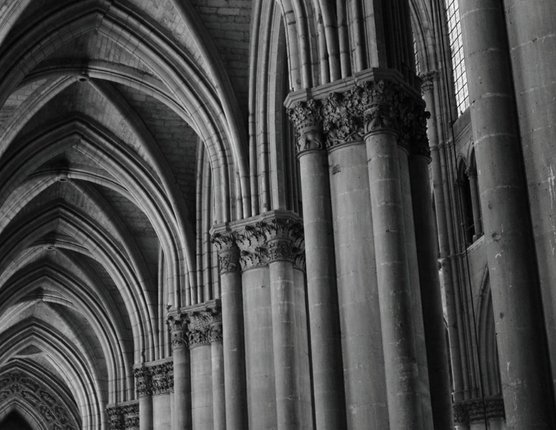 Commonly found in Gothic architecture, rib vaulted ceilings are not only breathtaking, but they are also much more durable and stand the test of time.

While at first glance they might resemble groin vault ceilings, the major difference is that rib vaulted ceilings are composed of a series of arches with diagonal structures and ribs running across the length of the ceiling.

The symmetrical and non-centered brick-laying design goes as far back as the Mesopotamian times and is incredibly pleasing to the eye. 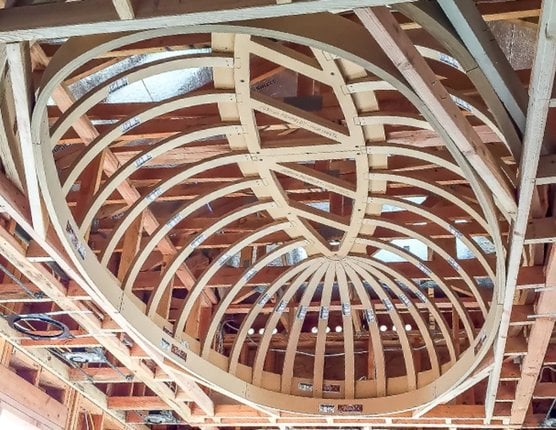 While at first glance people might call this the elongated dome vaulted ceiling, the major difference between that and the oval vaulted dome ceiling is the dome ties. 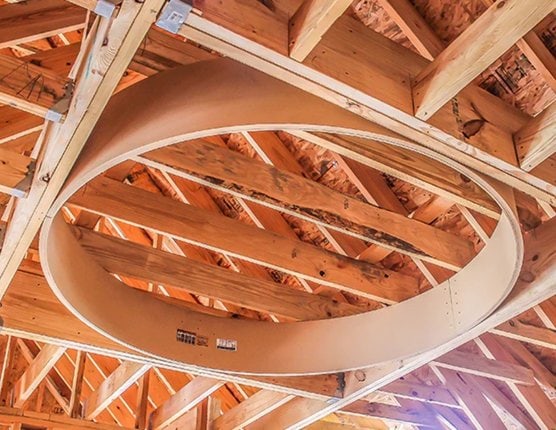 These ceilings are custom fit for any size, and can be best described to be “donut-shaped”. This simple circle design adds a retro-futuristic feel to your interiors. 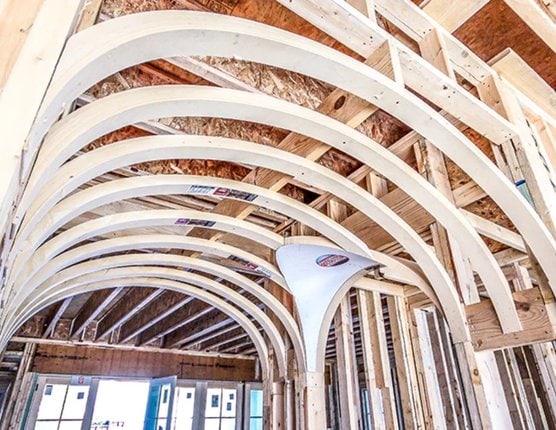 Igloo vaulted ceilings are essentially barrel vaulted ceilings with a series of arches cut into them. There has to be a lot of careful planning of the interiors that are put into allocating space for windows and other objects. These ceilings are always dramatic pieces of work, and it has to be made sure that nothing is obstructing the ceiling itself. 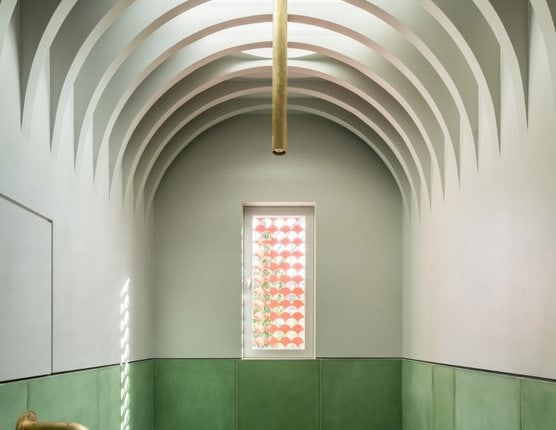 Finally, we come to the arched vaulted ceiling. Not a common sight in most houses, they are definitely a design reserved for people who want an unconventional twist to their modern interiors.

While vaulted ceilings have the same principle behind them, there are several different layouts to choose from which can make or break the overall aesthetic of your interiors.

When planning your dream home, you want to make sure that you leave no stone unturned. And now, you have 17 different types of vaulted ceilings to choose from!