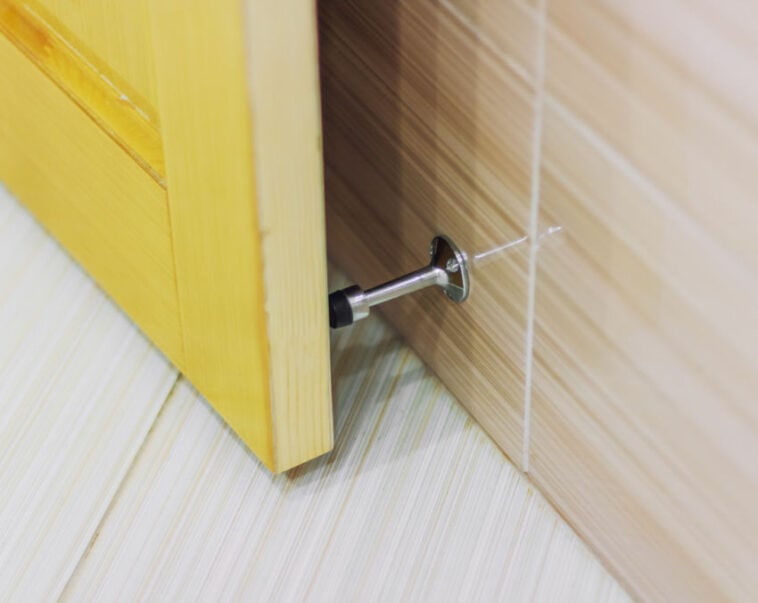 A door stopper might seem like a very minor addition to your interiors, but its functionality gets more important the more you think about it.

Door stoppers help stop the door at a certain distance (duh!), but it does that for a variety of factors. Door stoppers prevent walls from taking damage by doorknobs, preserve the paint, protect the door itself, and reduce the chances of accidents caused by slamming doors.

With these many advantages, how do you choose the best door stopper for your house? Do you have to sacrifice aesthetics for functionality? To answer your questions, I have listed out the 15 types of door stoppers. Read on to find out about each one and choose the one which suits you the best!

How to Choose the Right Door Stopper?

Although it might seem a little overwhelming at first, choosing the right door stopper has only a few criteria to consider.

Mainly, you have to consider the type of door you have alongside the amount of protection you need for the wall. Aside from this, certain door stoppers can also keep the door ajar. You can also put aesthetic value when you consider one as well.

Beyond that, you need to consider factors like wind and security, which affect the kind of door stopper you will be getting. This brings down the risk of accidents and harm. 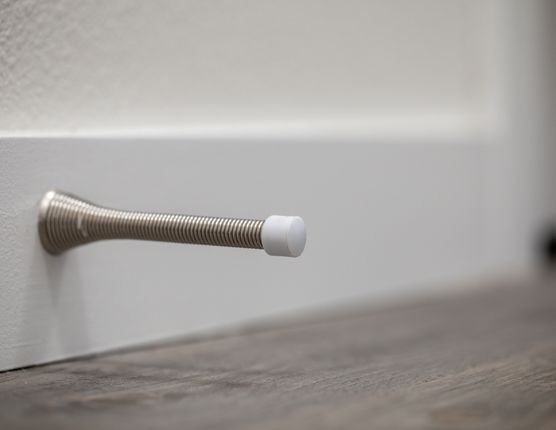 A baseboard door stopper is probably the image that comes to mind when you think of door stoppers. These are metal pieces with a rubber tip affixed to a baseboard.

Baseboard stoppers are best suited for hollow-core doors. They are fitted at the very bottom of the baseboard of a wall. Like all door stoppers, these preserve the paint of your walls and protect the doorknob from scratches and damage.

Beyond the usual advantages, baseboard door stoppers reduce the noise from swinging gates, as well as any accidents which may cause because of it. They are incredibly easy to install and require barely any experience to put on your door. 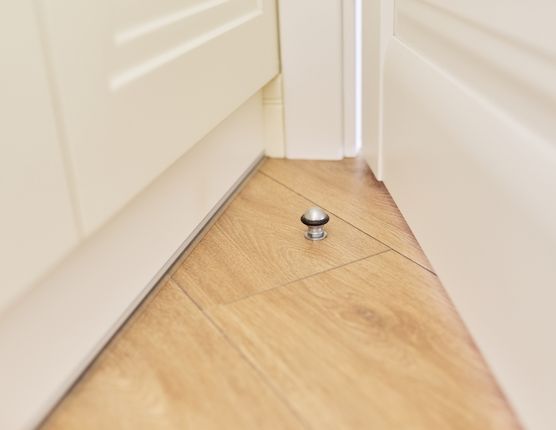 A more low-profile option, the floor door stopper attaches to the floor itself to stop the door at its very base.

Apart from protecting the wall behind the door, floor door stoppers are installed when the priority is to protect items in the pathway of the door itself rather than the wall. These stoppers are essentially metal arches bolted into the floor or onto a sturdy board beneath the entrance. The floor door stopper also reduces the risk of tripping over it.

They come in a variety of styles apart from the standard metal. There’s rubber, magnetic, or one with a chain to both stop the door and hold it open. If you really want a subtle door stopper, this certainly is the pick for you. 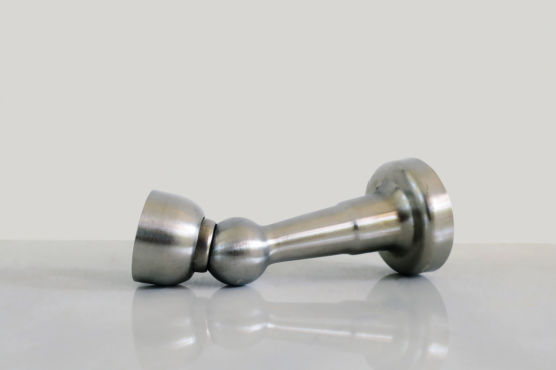 One of the most versatile door stoppers, the magnetic door stopper does everything you need a doorstop to do, and so much more.

Depending on the requirements, magnetic door stoppers can be affixed to the wall, the baseboard, or on the floor itself. Commonly found fixed to the floor, these door stoppers help avoid the damage caused by slamming doors, but also help in keeping the door ajar.

The magnetic force prevents the door from closing unless some force is put behind closing the door. Beyond this, they come in a variety of aesthetically pleasing designs and finishes. 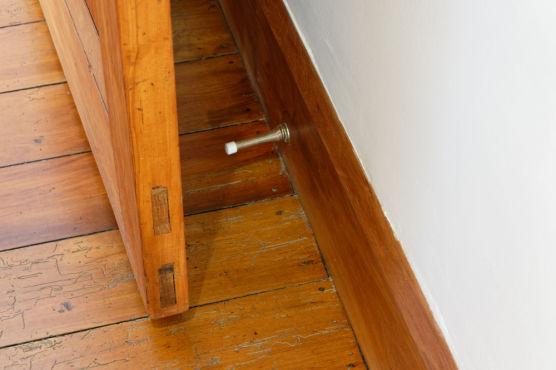 While functionally being similar to baseboard stoppers, spring door stoppers use a very different mechanism to protect both the wall as well as the door.

Spring door stoppers use a heavy-duty spring mechanism to prevent the door from slamming into the wall. If the door were to slam with a lot of force, the spring simply makes it bounce back and save the wall behind it. Since the spring redistributes the force instead of being a rigid structure, it stops the door with minimal damage to the door itself.

They are fixed on the base of the door or on the baseboard of the wall itself. Spring door stoppers are flexible, long-lasting, and perfect for both homes and commercial spaces.

A door stopper that focuses more on holding the door open than simply stopping a door at a certain angle, the overhead door stopper is a great option.

As the name suggests, the overhead door stopper is installed above the door frame as well as the door itself. Overhead door stoppers prevent a collision by stopping the door at a certain angle when pushed open. You can disengage this hold by using a bit of force while pulling it close.

In a way, this door stopper helps protect everything from the door, the wall behind it, as well as anything in its general area.

The hinge pin door gets its name from literally being attached to the hinge. One of the easiest door stoppers to install, don’t let its simplicity fool you!

Made with various components such as a rubber pad, an angled metal hook, and some sturdy metal that holds it in place, the door stopper attaches itself to either side of the door hinge to control the door’s movement. The support on either side prevents the door from opening too wide.

The simplicity comes from the fact that you don’t need to install any additional hardware. Although they aren’t the most aesthetically pleasing, they are very discreet and can be easily concealed.

Often mistakenly referred to as a hinge pin door stopper, the hook door stopper works in a similar fashion.

However, the difference is that the hook door stopper doesn’t attach itself to the hinge of the door. Instead, this door stopper can be attached to the floor or on the door, with an eyelet on the adjacent wall.

The hook door dropper is made of a door stop that goes on the floor, a hook, and an eyelet which the hook is fixed into. The hook door stopper is extremely useful if you want to leave a door ajar for extended periods of time. 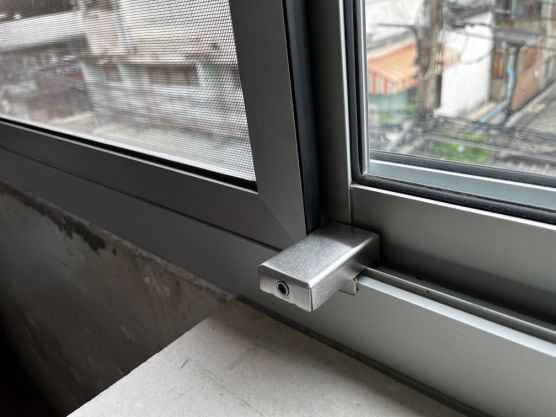 Sliding door stoppers are usually used to reduce the force of a closing door. They are discreetly set up on a wall. For the conventional need of stopping the door at a certain point, the sliding door stopper is affixed to the track itself.

Besides these advantages, sliding door stoppers are mostly used for security purposes. They are installed on the inside of a track to prevent forced entry from the outside. 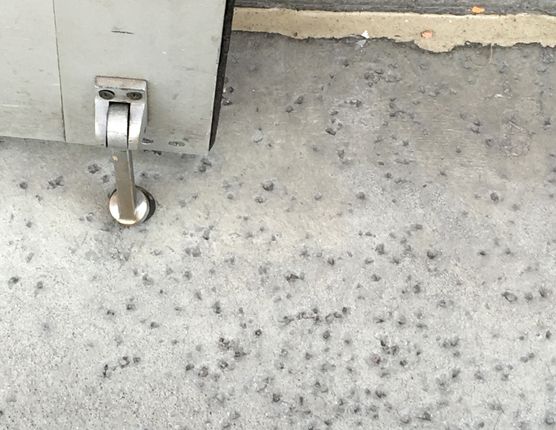 Another common type of door stopper you’re bound to find in commercial and public spaces, the kick-down door stopper is a simple and more manual option.

Also known as flip-down door stoppers, they are attached to the base of a door and are mechanically similar to the kick-down stands on a motorcycle. These door stops can be installed on either side of the door. Installing it on the inside stops the door from opening if the stopper is set down, and on the outside means, the door is held open by the stopper.

There is a drawback to these kinds of stoppers, which is you have to manually operate them with your foot to use them. Unlike the other options before this, it is not an automatic solution. 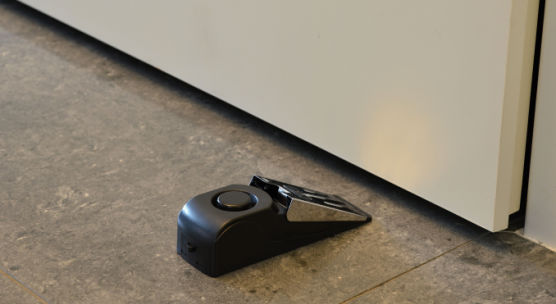 Made from either cast iron or iron, the security door stopper also comes with a magnetic mechanism and an alarm. The mechanism is meant to prevent forceful entry from the outside. The alarm is a handy feature to warn you about intruders. They also have a portable version that you can carry with you on a trip.

Combining the spring door stopper with the sliding door stopper, you get the barn door stopper. They are made specifically to prevent barn doors from opening up too wide, as they are on a track and are on wheels with no blocks on either side.

The barn door stopper is attached to the track itself. There is a baseboard that attaches itself like a claw on the track, and a spring with a plastic or rubber tip to stop the door wherever you need it to. These help the door stay on track and keep the door from falling off.

While technically not a door stopper, the door chock was made out of a necessity for firefighters in their line of duty.

Since firefighters have to wade through dangerous environments, they need to keep doors open to have means of proper escape as well as bring in water hoses to put out fires. However, the hinge stops used to be unreliable, or just too bulky to carry.

Door chocks solve this problem by being portable as well as sturdy. They are fitted directly on the hinge of a door to keep it open until it is removed. Although they were designed for firefighters, you can use them in your homes too for a child-safe alternative to regular door stops. They even come in various colors to choose from. 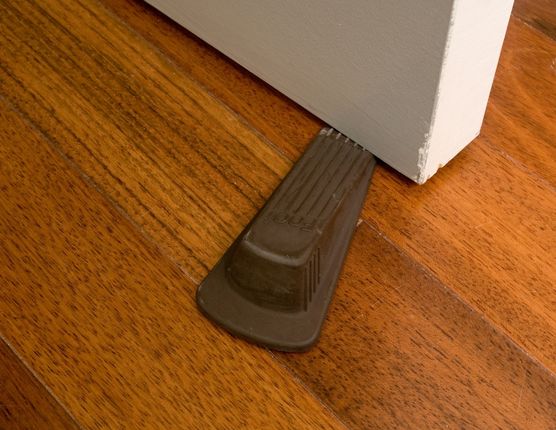 Possibly the simplest option for a door stopper, the wedge door stopper doesn’t require an installation in any way. Instead, you just need to keep it behind or in front of a door. They can both stop a door at a certain angle, or hold it open depending on what is required.

These provide a temporary solution, allowing you to move it whenever you please. They are usually made from a durable material like rubber, and made in a way so that a significant part of the wedge can actually go under the door itself.

The roller door stopper was made for a very specific situation. These door stoppers come in handy whenever you have two doors at a 90° angle to each other and have the same swing trajectory.

These come in both straight and curved variants. The roller door stopper helps reduce the damage caused by the collision of two doors when open together, or when one is opened while the other one is left ajar. The wheel at the end of the stopper allows fluid use of the door without manual application of the mechanism, like in the kick-down door stopper.

Finally, we come to the most unique, if not eccentric option when it comes to door stoppers.

Decorative door stoppers can come in multiple designs, everything from a man pushing a door open to a dog sitting in front of the door holding it open! When it comes to creativity and adding a unique flair to your house, the decorative door stop is what you should be looking at. Since there is no restriction on the door stopper itself as long as it fulfills one purpose, the sky is the limit in terms of what you want as the design!

Choosing a door stopper goes beyond just picking any one of them at random. Each door stopper has its own unique functionality and role.

And now with this guide to the different types of door stoppers, you can accurately figure out which one of them will fulfill your requirements perfectly. A door stopper can not only provide convenience but also give additional security and safety to the house.